Due to COVID-19 restrictions and state border closures the promoter and national agent have rescheduled The Never Again Tour.

The artists’ would like to thank their loyal fans and are looking forward to performing on Friday 5th August 2022.

All tickets will be transferred to the new show date. Refunds will be by request only and via email info@southportrsl.com.au, please include your confirmation number.

The concept originated in 2005 and was warmly embraced by fans, with sell out shows across the country. The mutual respect between the two artists is palpable – “We’ve become really good friends,” James says. “Mark is a gentleman. He’s intelligent, widely read and worldly. And he’s very funny. He’s got a wonderfully dark sense of humour, not only about other people and things but himself. I like to think we’re similar in the sense we’re pretty self-critical, and we’re critical in general – we don’t suffer fools. And we don’t suffer ourselves either, as we tend to be a bit foolish sometimes.”

The ”Never Again” show format will see James and Mark perform alone, showcasing a veritable song book of the finest Australian tracks from across their stellar careers, then joining forces for a combined set in what will make up a rare three part performance.

James Reyne has a celebrated history – including 19 Top 40 hits (nine solo, seven with Australian Crawl, and three as part of Company of Strangers) and he was inducted into the ARIA Hall of Fame in 1996. But his quizzical eye remains firmly focused on the future. “That was then, this is now,” he notes in one of the new album’s many highlights, ‘A Little Ol’ Town South Of Bakersfield’. “Don’t make the past your sacred cow.”

“The thing I like about James is he’s an Australian artist, but he’s not a comfortable fit,” Mark Seymour says. “There’s something a bit edgy about James … it’s not like you can connect James with any particular trope.”

“There’s a really strong sense of character in James,” Mark adds. “He’s got a very powerful character that he can’t help – it just comes out of him. And, to me, that’s a real mark of honesty and truthfulness.”

The new album opens with a song Mark wrote with James, ‘Night Driving’. “We both have a healthy cynicism about co-writing,” James smiles. “But it’s always fun to write with someone you feel really comfortable with.”

“He’s still out there doing it, questioning everything, as you should,” James notes.

Don’t miss this opportunity to see two of Australia’s greatest songwriters, James Reyne and Mark Seymour, perform both together and alone. 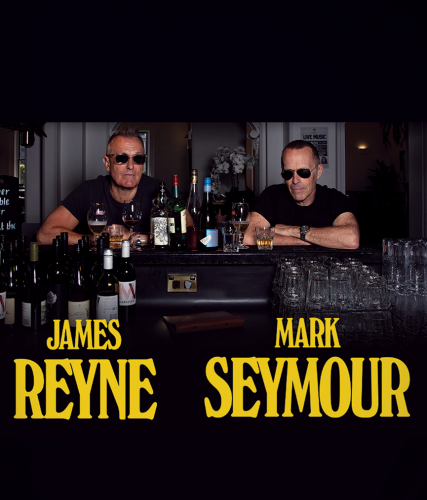