The Beatlegs are the Ultimate Beatles Tribute, who deliver an unforgettable two hour live show of Beatles magic. Reproducing the iconic sound and look of the Fab Four with multiple costume changes, superb harmonies and music.

The Beatlegs will have you dancing in the aisles and reminiscing as they play hit after hit of those memorable Beatle classics. The attention to detail creates a nostalgic porthole to the sixties and recreates a time that will never be repeated. Based in Brisbane, The Beatlegs are Queensland’s only Beatles Tribute show and are second to none Australia wide. The brilliant harmonies and the extensive catalog of hits will only leave you wanting more.

Taking you on a journey through the eight year height of the Beatles fame, The Beatlegs begin with that innocent age of the Beatles when Beatlemania was at its peak, and those slick suits and haircuts were as iconic as the music. They will then transform to the iconic Shea Stadium Concert and onto that magical mystery era of Sgt Peppers. Then the show is completed with the Let it Be and Abbey Road days, with a grand finale of the Roof Top concert.

The Beatlegs show is not just a tribute to the greatest rock n’ roll band of our time. It’s also a trip through time A nostalgic portal back to a time of innocence. It’s a show that appeals to young and old alike. So come together and celebrate the greatest rock phenomenon the world has ever seen and the sounds of some of the greatest songs ever written.

“A Splendid Time Is Guaranteed For All” 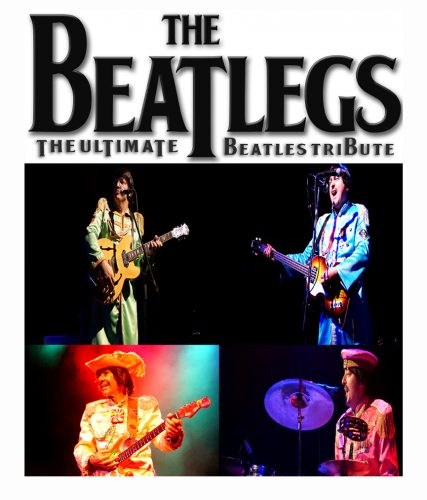